Why Gears are Used – Torque/Speed Translation

Gears are used for torque and speed translation – typically to achieve higher torque from high speed, low torque servo motors. When paired with a gearbox, torque output increases in proportion to the gear ratio. However, output speed is reduced by the same ratio.

Gear ratios are determined based on the mechanical design of the gearbox. Equations for the gear ratio can vary. When selecting a gear, the minimum gear ratio needed for an application can be calculated based on the output torque requirement of the system and the available input torque from the servo motor.  Gear efficiency must also be factored into this equation.

When choosing the proper gear ratio, the maximum load speed must also be considered as the addition of a gear requires the motor to operate faster than the required output speed. Gear efficiency does not impact the speed translation.

Using the same gear ratio as in the example above, if 100 RPM is required at the output of the gearbox, then the input speed must be 5000 RPM.

When the bearings in a gearbox are not sufficiently sized for an off-axis load, a second set of load bearings must be added. This creates an over-constrained system that requires a flexible coupling to account for any eccentricity between the load shaft and the gear shaft.

The use of a flexible coupling introduces resonance to the plant transfer function of the system. When load and motor inertias are significantly mismatched, the frequency of the resonance decreases. Gears can be used to improve unbalanced load to motor inertias and increase the resonant frequency such that it does not interfere with the control loop. To better understand this phenomenon, an understanding of the inertia ratio is critical.

Figure 1 below shows that a higher inertia ratio shifts the resonant frequency to the left in the plant transfer function. To avoid instability caused by the lower frequency resonance, the bandwidth should be reduced – also reducing the performance of the control system.

The following simple, unitless example compares the inertia ratio with and without a gear reducer.

This high inertia ratio will require a balance between performance and stability from a control perspective. To avoid the interference of resonances and maintain stability, the bandwidth of the control loop must be reduced.

2. The load is coupled to a gearbox which is driven by a servo motor. The gear ratio is 5:1, and the gear inertia is 1. 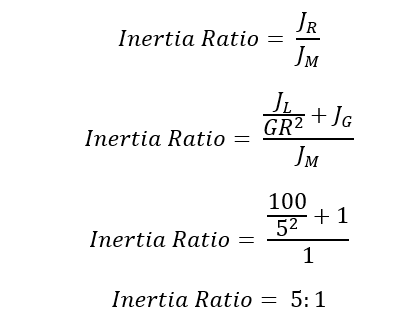 The inertia ratio has been significantly reduced by the addition of a gearbox from 100:1 to 5:1. In this case, the bandwidth and performance of the control loop are less restricted by the resonances.

The gear effectively reduces the reflected inertia, reducing the inertia ratio and increasing the stability of over-constrained systems. For more information on resonances introduced to the control system by mechanical components, read our technical note on Frameless Motor Advantages.

The distance the gearbox output moves relative to the input is dependent on the gear ratio. With a 20:1 gear ratio, for example, the input shaft must turn 20 revolutions for the output to turn one revolution. This effectively increases the resolution of the input encoder by a factor of 20. Due to the gearbox backlash, however, it is not possible to realize the increased resolution for small moves within the dead-band.

While gears are effective at translating torque for servo motors, there are several challenges that need to be considered before integrating a gearbox into a motion system.

Backlash introduces a time delay and position dead-band between the input and output of the gearbox and can cause instability in servo loops. Backlash is specifically undesirable for applications that require direction changes like pick-and-place systems used in packaging and assembly and web-line systems that utilize phase-advance and phase-retard routines for high synchronicity.

While there are techniques to minimize backlash, such as bearing preload, this can increase the friction in the gearbox and reduce the life of the system. Component integrators can also utilize dual encoders on the input and output of the gearbox to close the velocity loop on the input and close the position loop on the output, shown in figure 3. While this improves accuracy and repeatability when changing the direction of rotation, it does not fix effects of backlash. It is important to note that backlash increases over time as gear teeth wear due to direct contact during rotation.

Gearboxes are not torsionally stiff components, meaning they have some amount of compliance. Flexible couplings, which are typically used with geared servo motors, are also compliant. These mechanical components add resonances to the system which interfere with the servo drive control loops, adding vibration or instability depending on where the position loop is closed.

The time it takes the load to settle after meeting the commanded set point is called the settling time. During this time, the load oscillates until it comes within tolerance of the set-point, figure 4.

If two encoders are used, one at the input and one at the output of the gear, the position loop can be closed at the load to track the true position within the dead-band. However, a resonance introduced by a flexible coupling could increase the settling time of the load. Longer settling times lead to reduced throughput which is detrimental to applications such as delta bots, indexing tables, and semiconductor wafer handling systems.

Gearboxes are not perfectly efficient, meaning that there is power lost as torque is increased and transmitted to the load. The efficiency is dependent on mechanical components such as the gear teeth, bearings, seals, and grease which introduce friction to the gearbox. To overcome this friction and achieve the required load torque, the motor output torque must increase. This also means that the input power to the motor must increase, placing a bigger burden on the servo drive. A geared motor is not an ideal solution for mobile robotics, exoskeletons, and battery-powered applications that have a reduced power budget.

The addition of a gear increases the axial length and mass of the assembly, posing a challenge for robotic arms and other robotic systems that operate in constrained spaces. This is particularly challenging for lower payload mobile robotics systems and unmanned aerial vehicle (UAV) applications that have restrictive weight allowances.

When operating continuously or at high duty cycles, temperature within the joint increases. High temperatures reduce the viscosity of gear lubrication, increasing friction in the gear and reducing its lifetime. The gear lubrication also poses a risk of contamination which requires additional mechanical components like labyrinth seals or IP rated housings increasing the size, mass, and cost of the geared motor assembly. Additionally, the friction from the mating gear teeth causes wear and increases backlash over time.

In addition to these technical concerns, the addition of a gear to the mechanical system increases the overall cost. Not only does system cost increase due to the additional component or components (if flexible couplings for constrained loads are also used), but due to increased service costs from component degradation/failure.

What is a direct drive motor?

A direct drive motor is a motor that directly drives the load. It consists of a stator, the fixed component, and a rotor, the rotating component that is directly coupled to the load typically through mounting screws or adhesive bond. Direct drive motors typically have large through-holes and high torque density when compared to servo motors of similar form factor.

Why use a direct drive motor?

Faster Settling Times
When using a direct drive motor, the load is directly mounted to the rotor and bypasses other transmission components, such as gearboxes, belts, pulleys, and flexible couplings for maximal stiffness. This enables significantly faster settling times than geared motors. When the load settles faster, the motion profile is completed faster, offering improved throughput compared to geared actuators.

Reduced Size
Direct drive motors generally have higher torque density than servo motors of a similar size, so a gear is not always needed to achieve the load torque requirements. This means that size of the actuator is reduced to only the motor and load. In certain cases where the load is constrained, bearings and flexible couplings may be required. But the removal of the gearbox alone significantly reduces the size and weight of the actuator.

Lower Cost of Ownership
While they typically have higher up-front costs, direct drive motors offer longer mean time before failure (MTBF) to the simplicity of the design. The reduction of components reduces the failure points in the system and the cost of ownership.

Removes Burden of Inertia Mismatch
Since the load is directly mounted to the motor, removing the need for flexible couplings, the inertia ratio can be higher without sacrificing control loop performance. However, load inertia does impact the achievable acceleration of the motor and should be considered during motor selection. A high load inertia reduces the angular acceleration while the torque is maintained.

The blue dots in figure 5 summarize the advantages of both direct drive and geared servo motors.

For the direct drive application:

For the geared application:

where the motor torque is now reduced by the gear ratio and motor speed is increased. The gear efficiency must also be considered.

This example shows that the motor output power is higher for the geared application than for the direct drive application. But this is not the whole story. What also matters in discussions about motor efficiency is the motor input power requirement from the servo drive which is dependent on the power losses in the motor.

There are two key contributors to power loss in a motor – copper and core. Copper losses are caused by heating in the motor as current flows through the copper windings. Copper loss is equivalent to the square of current multiplied by the line-to-line resistance.

Core losses are caused by eddy currents in the stator stack and hysteresis of magnetic flux lines from the rapidly changing magnetic field. These losses are speed dependent – the higher the electrical frequency, the larger the contribution of core losses to the total power losses in the motor. Core losses are difficult to model but are typically equal to copper losses at 80% of the no-load speed and 80% of the continuously rated torque.

When using a gear, the torque requirement from the motor is reduced which generally means that the motor can operate at a lower current. Using our copper loss equation above, we see that a lower current reduces the copper losses in the motor windings. However, the motor must now operate at a faster speed, which we now know will increase the core losses in the motor.
If a direct drive motor is used, the motor must be able to produce enough torque to drive the load. This means that it will need more current than the geared motor, and copper losses will increase. However, now the motor will run at a slower speed, resulting in lower core losses than the motor that is paired with a gearbox.

The conversation around efficiency is not straightforward and heavily dependent on the motion profiles and gear efficiency. Generally, geared solutions consume more power strictly based on the gear efficiency. However, each application will require a different motion profile and torque-speed requirement. Output power, power loss, and input power should be modeled to determine the true power savings of a direct drive motor over a geared motor.