This technical note reviews mechanical resonance issues associated with inertial loads driven by framed motors via compliant couplings and frameless motor advantages. The mechanical system is modeled, and the effect of load/motor inertia ratio is discussed. Closed loop control is reviewed. Mitigation techniques to reduce or eliminate resonance are outlined. Finally, the optimal solution of a frameless motor is presented.

A typical framed motor connected to a load is shown in figure 1. The motor is mounted to a plate and incorporates an encoder mounted to the motor shaft. The motor shaft rotates on internal bearings. The load is also supported by bearings. The motor and load are mechanically constrained and imperfect alignment of the two shafts is inevitable. A direct connection of the shafts would cause vibration and drastically reduce bearing life. A flexible coupling is therefore used to connect the shafts. The coupling must be torsionally stiff but accommodate radial misalignment.

The mechanical system can be modelled as two inertias connected via a spring. The motor and load should be considered as two separate objects with independent positions and velocities. The spring represents the compliance of the components between the motor and load. A flexible coupling provides a small amount of viscous damping proportional to the velocity difference between motor and load.

The spring constant depends on the compliance of all system elements: the coupling, the motor shaft and possibly a gearbox. A torsionally stiff, or less compliant, device has a high K. For the system in figure 1:

Coupling compliance information should be available in the relevant manufacturer datasheet. The spring constant of the motor shaft can be calculated as follows:

The modeled system has a “natural” frequency of oscillation or resonant frequency. When the motor turns, the load does not move until the spring winds up. The higher the load inertia, the greater the wind up. When the wind/unwind torque is in phase with the motor motion, it adds to the planned motion and can lead to resonance. It is also possible for the wind/unwind torque to be out of phase with the motion of the motor, cancelling some or all of the motor motion. This results in sluggish performance, the load significantly lagging the motor.

Resonance is typically in the audible range and can vary from a loud, low frequency grinding noise to a fainter high-pitched whine depending on the system compliance and inertias. The resonant frequency in Hertz can be calculated as follows:

If the mechanical system is excited by sinewaves of varying frequencies, a graph of gain (motor displacement / motor command) versus frequency can be plotted as shown in figure 3. Rather than consider specific inertias it is instructive to compare the response of different load/motor inertia ratios. Note that increasing the inertia ratio increases the magnitude and bandwidth of the unstable region as well as pushing these regions to lower frequencies. 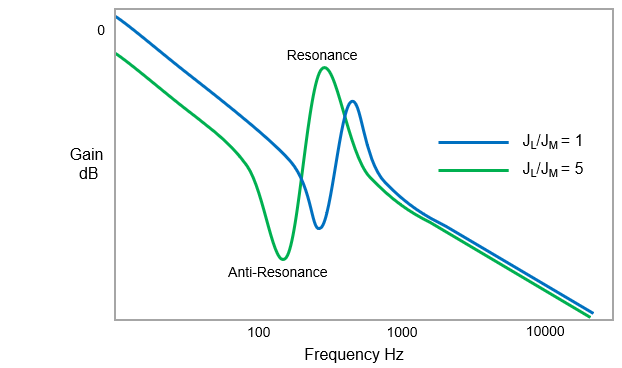 A typical velocity loop is shown in figure 4. Integral gain is not shown for simplicity. Note that the motor/load transfer function is inversely proportional to the system inertia (motor, coupling, load). The “s” term indicates the frequency dependence of the motor/load system. The compensator proportional gain (KP) is adjusted to give the desired velocity loop bandwidth and considers the transfer functions of the current loop, motor & load, encoder.

Clearly it would not be advisable for the bandwidth of the velocity loop to include the unstable frequencies of the mechanical system. There is, however, another problem to consider. For very small movements of the motor, the load is effectively uncoupled due to spring windup and the compensator sees only the motor and coupling inertias. For larger movements, the load engages and now the compensator sees the inertia of the load as well. If the load inertia is large relative to the motor, it is impossible to properly stabilize the servo loop. An industry rule-of-thumb recommends limiting the load/motor inertia ratio to 10:1. In moderate to high performance systems 3:1 is a more realistic guideline.

Use oversized, high quality servo grade couplings. Increasing motor shaft thickness and reducing length also improves stiffness although this may not be practical.

Increase Damping
Increasing static friction is not recommended as wear becomes a problem. Adding viscous friction is usually not practical and adds cost. The characteristics of the mechanical system will change over time so it is difficult to assess the correct amount of viscous damping. Additional damping also increases the continuous torque requirement of the motor.

Inertia Manipulation
Reducing the load inertia relative to the motor inertia is the most effective mechanical technique. As the load inertia itself is usually specified by design, a gearbox is typically used to reduce the “reflected” inertia of the load. The reflected inertia is the actual load inertia divided by the square of the gearbox ratio. The motor must now rotate faster, in proportion to the gear ratio, to maintain the same load speed.

For example, a 10:1 gearbox reduces the effective load inertia by a factor of 100 but the motor must turn 10 times faster for the same load speed. Gearboxes increase cost, complexity and size. They also introduce new problems like gear backlash and reduced power transmission efficiency.

Low Pass Filters
Employing a low pass filter in the control loop is a common method when the mechanical resonance is at higher frequencies. The filter does, however, contribute a significant phase loss which compromises phase margin – a measure of stability. The servo loop typically must be “detuned” for reduced bandwidth. Performance is degraded and the ability to respond to rapidly changing commands is compromised.

Notch Filters
A notch filter at a specific frequency can eliminate resonance problems without compromising servo loop performance. Parameters of the filter must set to precisely to counteract resonance. Different machines have different resonant frequencies requiring individual notch filter tuning. Resonant frequencies also shift due to machine wear. If the shift is significant the notch filter will become ineffective.

The Optimal Solution a Frameless Motor

The optimal solution to mechanical resonance is the frameless motor. The motor is integrated into the load as shown in figure 5. The rotor is typically bonded to the load. Stator mounting must ensure an air gap of 0.5-0.8 mm for a high-performance motor. Machining tolerances of 0.05 mm are typically required. The flexible coupling, the primary cause of resonance, is eliminated. Load/motor inertia ratio is no longer a concern. Higher bandwidth, more responsive servo loops are possible. The size of the machine can be reduced significantly. Eliminating mechanical compliance improves system accuracy. The need for fewer mechanical components increases MTBF.