This technical note describes optimal motor sizing process for a servo motor. A motor model is provided, and thermal issues are discussed. Torque speed curves and typical load torques are reviewed. Both motion velocity and torque profiles are presented. The calculation of peak and continuous torque is outlined. The paper concludes with a worked example.

To ensure optimal servo control, an appropriately sized motor and drive must be selected. Under sizing results in inferior performance and motor overheating. An oversized motor/drive adds unnecessary cost. The system should be sized to provide the required torque and speed with sufficient margins to allow for variations in load parameters.

To select a correct drive/motor, the load must be characterized, and the motion profile defined. In some applications, the maximum allowable motor temperature is the dominant parameter.

A frameless motor or a framed motor that does not connect to the load via a flexible shaft/coupling is assumed. Load/motor inertia ratio manipulation to mitigate mechanical resonance is therefore not a factor. For more information, see our technical note, Frameless Motor Advantages.

Two key equations define the characteristics of the servomotor and drive:

Both KT and KE are proportional to rotor magnet strength, magnetic path reluctance, number of stator coils, length of coil turns, number of rotor poles. A motor designed to deliver high torque per amp also generates a high back-EMF. For a given motor the magnet strength and magnetic path reluctance are fixed. Motor manufacturers, however, typically offer high KT / KE windings for maximum torque per amp when back-EMF is not an issue (high bus voltage and/or low speed) and low KT / KE windings when back-EMF is a factor (high speed and/or low bus voltage).

When current (I) is driven through the motor, the winding resistance (R) generates heat defined by the power loss equation, I2R. Typically referred to as copper losses, I2R losses are independent of speed.

Temperature increase due to copper/core losses depends on the thermal resistance (ability to transfer heat) of the motor components and mounting surface. The motor power output is constrained so that the maximum allowable temperature of the motor windings is not exceeded.

Before sizing a servo system, it is necessary to understand the capabilities of the motor and drive. These can be characterized in a torque-speed curve. An example is shown in figure 2. 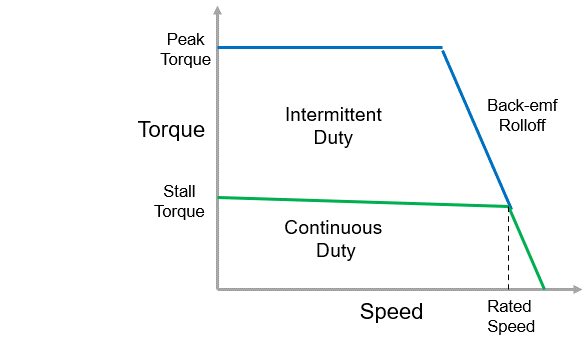 Torque-speed curves typically assume a 20-25°C ambient temperature and a motor heatsink approximating a “standard plate” (25 x 25 x 0.6 cm aluminum). If the motor is operated outside these parameters, the torque-speed curves must be derated. In this case a thermal analysis of the installation is recommended.

When comparing torque/speed curves of different motors be sure to check the maximum rated temperature of each motor. Derating is proportional to the difference between the maximum and ambient temperatures. A motor with a higher maximum temperature rating will require less derating.

Four load parameters must be specified at the motor shaft. If there is a gearbox, leadscrew or belt between the motor and load, the mechanical advantage and efficiency of these devices should be considered. See our technical note, Frameless Motor Advantages for more details.

To execute a move to a new position, a velocity profile must be defined. There are tradeoffs between acceleration time and run speed to consider. A good place to start is to use a trapezoidal move with equal times for acceleration, run speed and deceleration as shown in figure 3. The total distance is the area under the curve. Run speed is easy to calculate as it is half the move distance divided by one third of the total move time. An alternative approach, for very short moves, is the triangular profile with lower acceleration and higher run speed. The trapezoidal profile is recommended.

The run speed defined by the motion profile must be less than the rated speed of the torque-speed curve. If not, the profile can be modified to accelerate/decelerate faster to a lower speed. Run speed time is longer. It may now be possible to move the required distance in the desired time. As acceleration is increased, care should be taken not to exceed the peak torque rating. Sometimes it is not possible to move the target distance in the desired time. For more on this go to, Velocity Profiles Revisited.

A trapezoidal profile has a step function acceleration profile as shown in figure 4. Rate of change of acceleration is known as jerk. High jerk, infinite in this case, causes wear and can excite mechanical resonance. An S-curve velocity profile can be employed to limit jerk. Up to twice the peak torque is required to accelerate in the same time. Most controllers can shape the acceleration to trade off jerk and peak torque.

The peak torque is defined by the torque required to accelerate and decelerate. These torques may be different for equal acceleration and deceleration times. For example, TF opposes acceleration but aids deceleration. The following equations can be used to calculate accel/decel torque. Note that the convention is positive torque for clockwise motion.

The calculated peak torque must fall inside the peak torque line on the torque/speed curve. A safety margin should exist to accommodate changes in load torques as the machine ages. The magnitude of the margin should be based on observations of the specific application.

Torque profiles of moves in opposite directions become more complicated when gravity is involved.

In figure 6 frictional torque has been replaced by a gravity torque of equal magnitude. For a move against gravity torque must now be supplied at hold time to maintain position. Because of the accelerating effect of gravity, the subsequent downward move requires less torque to accelerate, the same positive torque at run speed, and the same decelerating torque as was required during acceleration in the opposite direction.

The TRMS formula for a repeated move executed by a trapezoidal velocity profile is:

The cycle time, tc, incorporates all the move profile times plus the hold time.
There may be a sequence of moves rather than a single repeated move. The calculation must then include all the T2t segments. The cycle time is then the time of the entire sequence.

TRMS must fall in the continuous region of the torque/speed curve. As with peak torque, an application dependent safety margin should be included.

In most positioning applications load torques are minimized by design. TRMS is therefore typically dominated by accel/decel torques. The velocity profile clearly plays a key role in motor sizing. When the profile does not fit any torque/speed curve alternatives there are limited options when using a drive/motor system. The drive usually operates from AC power, so bus voltage selection is limited. When using drive motor components, it is possible to create a custom torque/speed curve by selecting a bus voltage, and motor Kt/Ke which are optimal for the application.

It is critical to be consistent with units of measure in motor sizing. This paper uses the following units:

As there is no gravity or tension, the torque during hold time Th = 0 Nm

In conclusion, the methodology behind sizing a motor is straightforward. Step two is more complex, and it may be necessary to use a best approximation.

For optimal motor sizing, sometimes the calculated torques and run speed do not fit any of the published torque/speed curves. It is normal to use an iterative process to get satisfactory results. It may be necessary to consider a custom bus voltage and/or motor winding to meet performance requirements.